Bird of the Month - March

Bird of the Month - March

March brings with it the start of Spring and it’s bird of the month, the song thrush embodies this with its beautiful song. The song thrush is smaller and browner than a mistle thrush and is a popular garden visitor across the UK.

Song thrushes live to approximately 3 years, and may choose to live in the same area for the entirety of their lifespan. 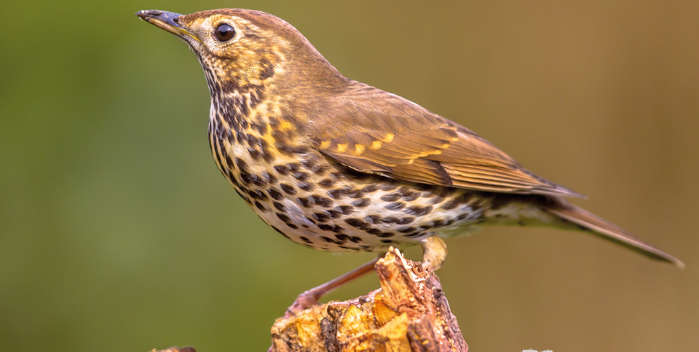 Song thrushes on average can grow to an approximate length of 23cm, with a wingspan of 33-36cm and weigh from 65 up to 100g.

The song thrush is named as such because of its beautiful song. If you’re unfamiliar with this, then we’ve supplied an example below.

Females can have extra broods as late as August, but due to weather and resources available there can be considerable losses at the egg and early chick stage. These late nests have been known to only fledge a third of the original eggs laid.

Song thrushes start nesting early and will aim to be ready for their first broods in early March. They will nest in a variety of locations including woodlands, grassland, farmland and urban areas. They may choose to nest in the understorey of shrubs and bramble or in tall thick hedgerows.

Territory size varies depending on the habitat. The boundaries will start to break down in the late summer when the last brood has fledged.

The average age of a song thrush is 3-4 years. The British Trust for Ornithology noted a dramatic decrease in song thrush numbers between 1970 and 1995, however, due to a concentrated effort, these numbers have shown a partial recovery over the past few years.

Song thrushes will primarily feed on earthworms and snails, but can also eat insect larvae and berries.

Please remember, that one of the commonest problems with local wildlife health issues in the UK is due to neglected and dirty feeders. We would like to ask that anyone wishing to assist in the feeding of wild birds makes sure to check and clean feeders regularly to help keep them safe and healthy.

Then why not pop into your local Scotsdales store today and speak with a member of our knowledgeable team. We will be happy to assist in any way we can with advice and guidance regarding the best options for birds in your garden.