Plant of the Month - December

Plant of the Month - December

The Yucca is a member of the agave family (Agavaceae) which also includes houseplants such as Dracaena, Beaucarnea and Cordyline. In the wild the Yucca grows in hot dry regions in North and South America and the Caribbean.  Hardy varieties can grow outside as an evergreen perennial, shrub or tree, although in frost prone areas it’s advised that these varieties are grown in a conservatory or greenhouse.
Yucca plants can be recognised by their broad, leathery leaves with a sharp tip that grows straight out of the soil or on one or more stems. In late summer to autumn panicles of bell-shaped cream coloured flowers will form.

Origin of the Yucca
The Yucca stems are imported from South America, where the plants grow on coffee plantations providing shade for the coffee plants. Yuccas grow about 30cm a year, and are pruned after a number of years. The pruned material is then potted in Europe, and after the leaf rosettes have formed the Yucca can be sold as a houseplant. 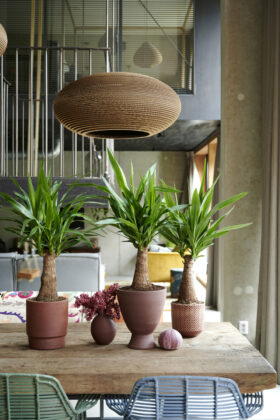 Yucca range
The most commonly sold species is the green-leafed Yucca elephantipes, named after an elephant’s foot, which the Yucca strongly resembles in natural conditions. Alongside the elephantipes species, Y. aloifolia and T. rostrata are also common, and in the garden we see Y. flaccida. There are also Yuccas where the leaf has pale edges, such as the Yucca elephantipes ‘Jewel’. 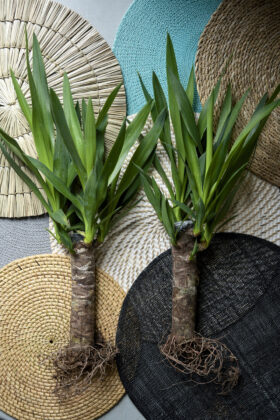 Care tips
The rule of thumb is that the bigger and thicker the stem the easier the plant is to look after.