Plant of the Month - March

Plant of the Month - March

The story of Dendrobium
Dendrobium features a sturdy stem with scales and leaves from which emerges a candle of idiosyncratic flowers, which may also have a light scent depending on the variety. The structure means that this orchid when in full bloom has high floral impact.

Dendrobium is a popular orchid from the same family as Phalaenopsis, Cambria and Cymbidium. All these orchids are characterised by the classic structure of the flower with five sepals and petals, an attractive lip and a ‘column’.

In the wild Dendrobium often grows as an epiphytic orchid on rocks or in trees without drawing nutrients from them. The roots obtain those nutrients from the air. As a pot orchid they are therefore planted in well-drained, airy soil or bark. The best-known is Dendrobium nobile, a torch of flowers with beautiful patterns. 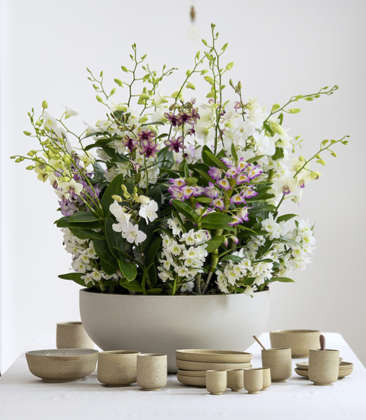 Origin
Dendrobium is a popular genus from the Orchidaceae family. Around 1200 Dendrobium species grow in the wild across a fairly large territory which is shaped like an enormous triangle, from the Himalayas and southern Japan to Australia and New Zealand. In the wild Dendrobium often grows as an epiphytic orchid on rocks or in trees without drawing nutrients from them.

Dendrobium assortment
There are two types of Dendrobium orchid: the compactum and the Phalaenopsis hybrids. The compactum species often have multiple canes (fully-grown pseudobulbs), and therefore also multiple stems with smaller flowers (1 to 7 cm). The best-known species is Dendrobium nobile, a torch of flowers with beautiful patterns. There are a number of series of this, of which the Star Class is the best-known. The Phalaenopsis hybrids have one or two stems with larger flowers (7 cm or bigger). The best-known of this is the Sa-Nook series in many different colours ranging from yellow, green and white through to purple, pink and bi-coloured. The lip colour can also vary. 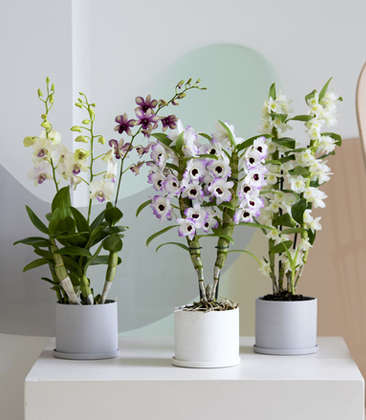 Plant care
The flowers sometimes suffer from botrytis (= blight or grey mould), a fungus that greatly diminishes the decorative value. The plants must also be sufficiently damp (not wet) in order to prevent the canes (pseudobulbs) and buds from drying out. 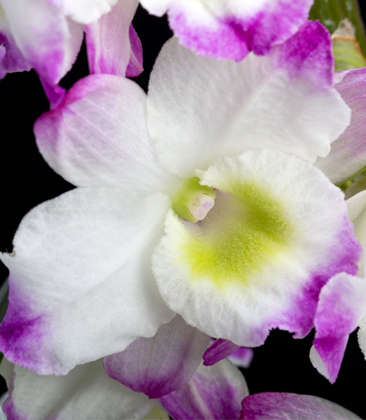