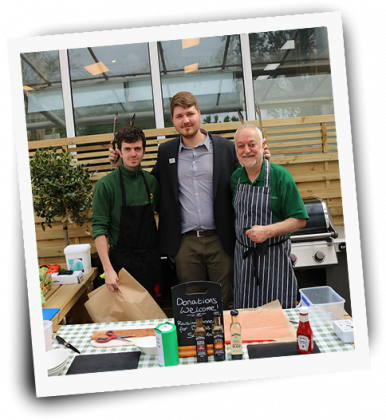 Barbecuing come rain or shine…
There’s no deigning that hail and rain isn’t everyone’s idea of great BBQ weather, but Chris and James from our Garden Furniture team battled the elements to serve up mouth-watering barbecue samples for all to try!

It’s not a problem using your BBQ during colder weather or even rain, that’s when an iGrill is your best friend by making sure the food hits optimum cooking temp. Just add a little more coal if you’re using a coal BBQ and expect the food to take a little longer so it might be worth starting the food off a little earlier. It might be tempting to keep BBQ lid lifting but each time you do that the heat will escape quicker than on a scorching hot day.

Obviously you need to be conscious of safety aspects when barbecuing as always, but it’s well worth the extra time and caution. Plenty of BBQ converts swear by cooking their Christmas meal on their BBQ in much the same way as our Garden Furniture guys have during this weekend event!

Now on to the tasty bit…

To hit the ground running, our BBQ fanatics served up corn-on-the-cob a BBQ classic, but with a lime and chilli twist. It’s such a simple way to enhance veggies on the grill, mixing citrus and spice, pinch of salt and pepper to taste – Easy! 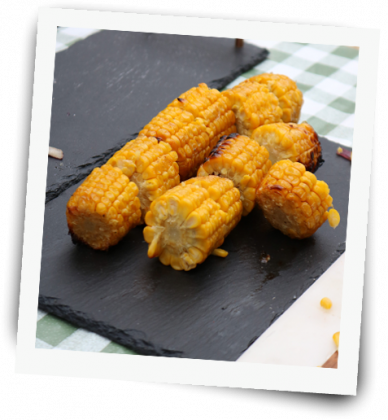 As the name of this weekend’s BBQ event suggests, the stand out star of the show was the beer can chicken cooked on the Genesis II with the essential Poultry Roaster, both by Weber – leaders in the BBQ world. 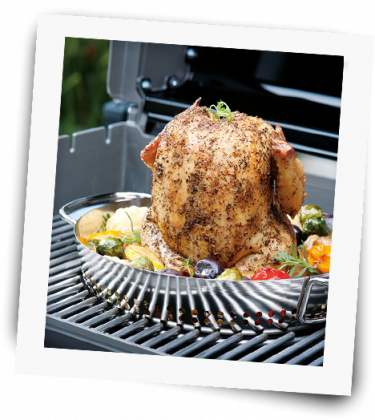 Once you’ve tried cooking chicken on a BBQ with a Poultry Roaster in the beer can chicken style, you won’t want to cook it any other way.
Simply fill the central “can” with your choice of beer or juice, place the chicken over the top, standing upright to infuse the meat with your favourite flavours. This creates a succulent flesh whilst allowing the skin to crisp up perfectly.

The gas fuelled Genesis II is part of the GBS range, allowing the central ring section of the grill can be removed and replaced with a variety of cooking accessories, just like the GBS Poultry Roaster our team used. Unlike the Poultry Roaster for charcoal BBQs, the GBS Poultry Roaster has the added benefit of being able to hold other foods, making a complete meal. Try chopping up veg to accompany your beer can chicken, the flavour from the chicken makes the veg unbelievably tasty!

Sometimes you just have to crack out the tongs and have an impromptu BBQ, as our Garden Furniture team can attest. They’re proof you don’t need to spend hours planning a grill, grab minced beef, chopped onions, herbs like fresh parsley and season to taste! 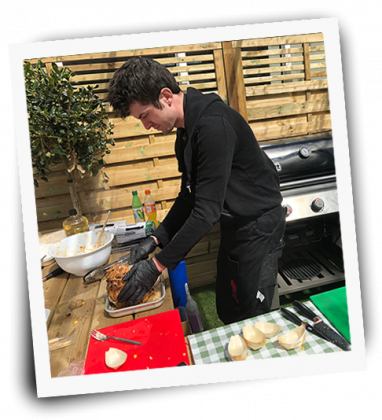 To make life easier for ourselves, we love the Weber Burger Press, it’s the fool proof way to make uniform burgers – so no one is fighting over the biggest patty.

For those who fancied an alternative to meat the team served up corn-on-the-cob again but this time covered in butter for juicy kernels that crunch to the bite. For those who can’t image a BBQ without a bun, our team sliced aubergines and tomatoes, seasoned lightly and just let the BBQ enhance the taste, with the option of Jack Daniel sauces to add some sweet and spice! 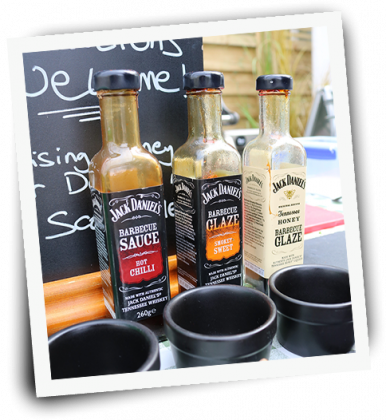 Our Garden Furniture team serve up tasty treats on the BBQ for free, but we’ve got a charity pot on the table for those who want to contribute to our latest charity venture. Scotsdales will be collecting for our defibrillator fund, with the aim of purchasing one for our Great Shelford store and another for our Fordham store. It’s so important to have these valuable resources for public use and the funds raised will include training for selected members of staff from the UK’s leading first aid provider, St.John’s Ambulance.

If you see the collection pot please consider a donation, and we’ll keep you posted on more fundraising events happening this summer. 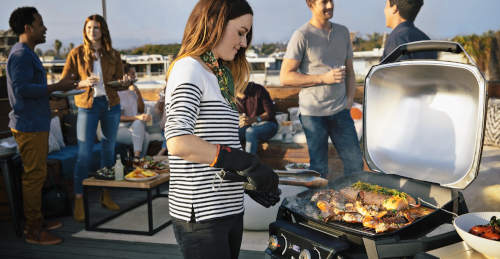 Eliminate worry over fuel restrictions, with the electric-powered Pulse 2000.Grilling is as simple as it should be, as the convenience of urban living meets the unmistakable taste of barbecue cuisine – no garden necessary.

Couldn’t make it this time?

Not to fear, Natioanl BBQ Week is nearly upon us and we will be hosting a series of BBQ demonstrations at both at Great Shelford and Horningsea stores. Click here to find out more.

Looking to find something else?

How to find us