Jobs in the Garden this August

Jobs in the Garden this August

It’s clear that the passion for gardening formed over the lock down period is still holding strong, and although August is a quieter month for jobs to do in the garden, there’ll soon be plenty to keep your green thumbs busy.
We’re seeing each year that autumn remains enjoyably warm and sunny, so we suggest looking at autumn as an extended albeit milder summer period to enjoy your outdoor space. Autumn bedding plants will be coming into their own and of course there’s plenty of tidying to do over the next few months as the year draws to an end.
So that’s what to expect as we march ahead, but for now we’ve collected our jobs list for the month of August, covering garden maintenance, grow your own and pest control.

Watering all plants is essential this month with extra attention given to containers that have limited capacity for water retention and new plants that are yet to become established. Water butts make a cost effective investment, especially if and when hosepipe bans occur.
Aim to water early in the morning or in the evening when it’s cool to limit the water evaporating from the soil. 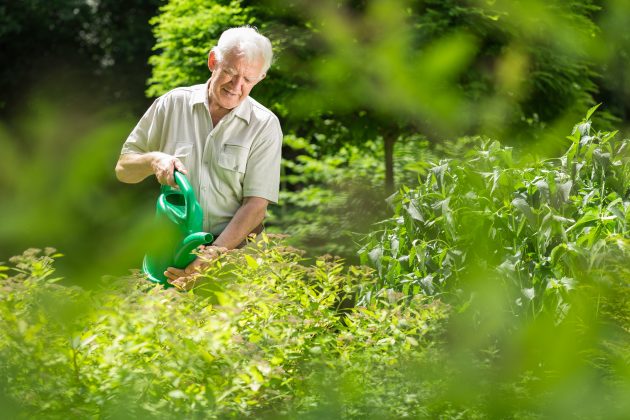 Keep topping up bird baths and bird feeders, remembering to keep them disinfected as often as possible to prevent the spread of diseases such as Trichomonosis (canker).

Ponds will also need topping up with fresh water.

Summer flowering shrubs such as lavender will require pruning once the blooms are finished. 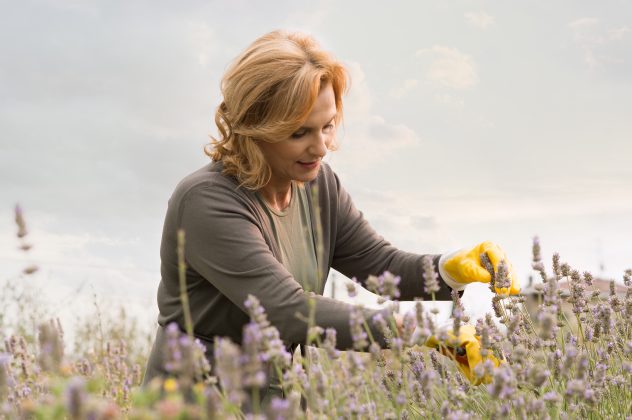 Camellias and rhododendrons need to watered thoroughly this month to make sure that the next year’s buds will develop well.

Collect ripe seeds on a dry day as soon as the seedhead has ripened. Collecting seeds from seedheads can be easier if the seedhead is dried in a greenhouse, warm windowsill or in an airing cupboard first.
Seeds should then be stored in envelopes, marked with the plant variety and then stored in an airtight container. Adding some desiccant will remove the excess moisture which would otherwise lead to the seed deteriorating, rotting or dying from a fungal disease.

Herbaceous plants that have died back will need their foliage and stems cut back.

Feed containers and perennial borders with a liquid tomato feed weekly. This will encourage flowering into early autumn.

Hedges can take a little trim now. The cold weather later in the year will stop too much extra growth until the spring. 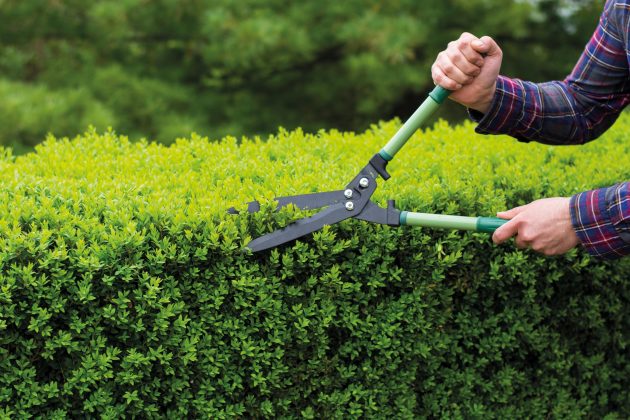 Start to sow winter-flowering pansies to enjoy into early spring, viola seeds that will over-winter for spring flowering and hardy annuals like cornflowers, calendulas and poppies.

Winter lettuce can be sown in modules indoors or in a greenhouse towards the end of August.

Winter-hardy spring onions can be sown directly into the ground for spring crops.

Continue sowing salad leaves for a continual harvest and radishes also make for a quick crop, ready for autumn harvesting. 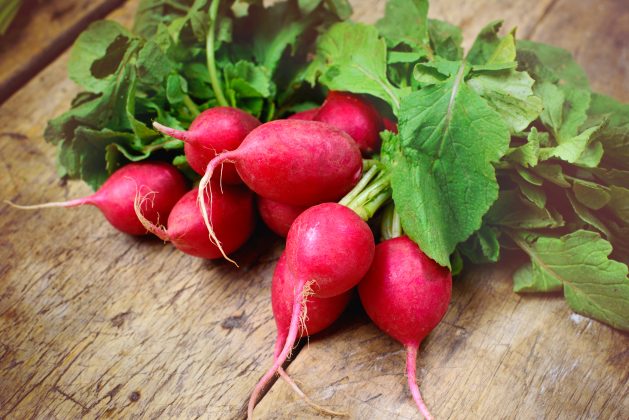 Pak Choi is prone to bolting if grown too early, so August is the ideal time to sow.

Winter cabbages can be planted out in early August. Remember to leave about 45cm between each plant as they do grow big.

Rooted strawberry runners and new strawberry plants can be planted outside now, giving enough time for the plants to establish before winter. Avoid planting in an area where you have grown strawberries previously within the last three years, to avoid diseases.

Prune restricted forms of apples and pears such as espalier, fans or pyramids to allow the sunlight to ripen the fruit. Pruning during the summer will also ensure good cropping the following year.
The time to prune is when the bottom third of the new shoots are stiff and woody.
Cut back new shoots that are more than 20cm long, to three leaves above the basal cluster leaves.
Cut back new growth from existing sideshoots to one leaf above the basal cluster.
Do not cut new shoots that are less than 20cm long as they can terminate in fruit buds.
Leave trees grown as standards or bush until winter to prune.

Cut back fruited raspberry canes on summer fruiting varieties to ground level without leaving a stub after harvesting in summer.
Autumn fruiting varieties can have a number of their canes reduced now if overcrowded and remove any suckers growing away from rows. 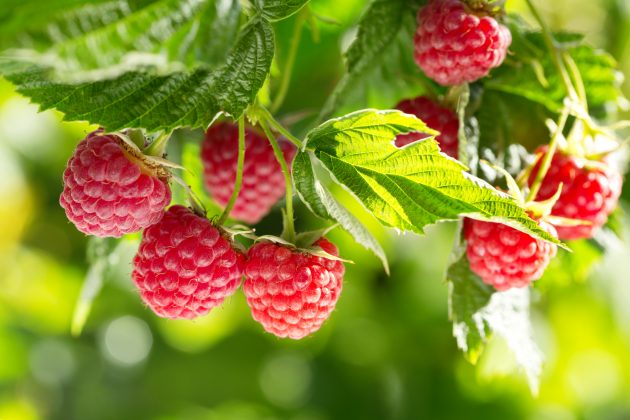 Earwigs love late flowering plants such as gladiolus, chrysanthemum and dahlias. They will climb up the plant in the morning and eat the flowers during the day.

Codling moth caterpillars will be hatching early this month, and cause havoc as they eat the core of fruits. Codling moth traps hung in trees during June will attract and trap the males following the pheromones or alternatively apply glue or grease bands around the trunks of trees in early October that trap the flightless females as they climb down. 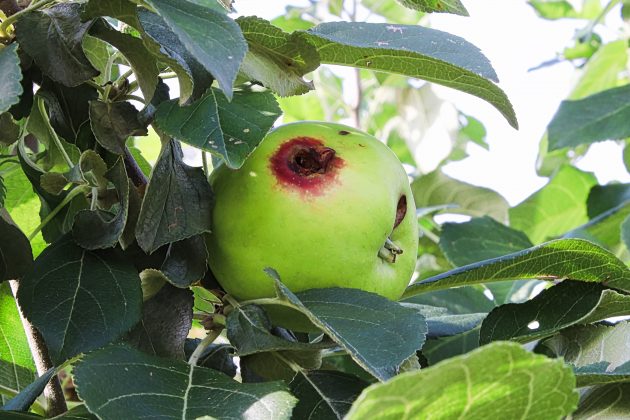 Adult viburnum beetles cause damage to leaves through August and into September. Unfortunately pesticides are more effective on the larvae than the adults, so treatments should be done in mid-April to May when the newly hatched larvae are feeding on the new foliage. The damage caused is not likely to affect the plant, but can be unsightly.
Avoid spraying plants that are in flower as to avoid harming pollinating insects. 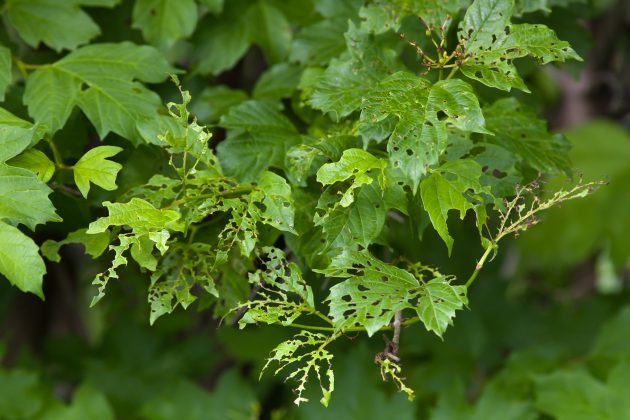 Wasps, much like bees earn their place in the garden as they are great pollinators, eat aphids and feed caterpillars to their young. They can be a problem when growing soft fruit though, so hang a wasp trap in the trees.

Keep an eye out in the greenhouse for whitefly, red spider mites and grey mould. Keeping your greenhouse well ventilated and high in humidity will help reduce these problems.