After last year’s success we’re excited to get on board with two whole weeks dedicated to the humble tomato.

If you’ve grown tomatoes before, then you’ll have heard of varieties like Moneymaker and Alicante, perhaps you’ve grown Tumbling Toms from a container or hanging basket. They’re great varieties and for a good reason, but the joy of grow your own is picking varieties you won’t find in your supermarkets.This is where the old heritage varieties earn their place as allotment favourites.

Heritage tomatoes may have lost favour over modern varieties as the latter tends to be more disease resistant and stronger growers, but this comes at the price of flavour.
We believe the little bit of added skill and attention is well worth it for the rich taste these varieties produce and not to mention they often bring more excitement visually to your plate with their unusual colouring and/or shapes – some almost unrecognizable as tomatoes!

Here’s our top pick of our favourite 5 heritage tomato varieties:

Ananas – Cordon Variety
Large, slightly flattened beefsteak tomatoes with distinctive yellow and orange streaked skins. The flesh of Ananas is juicy and sweet with a slightly acidic after-note and a thick meaty texture. Ananas translates from French as pineapple, which is a nod to the sweet and acidic flavour. 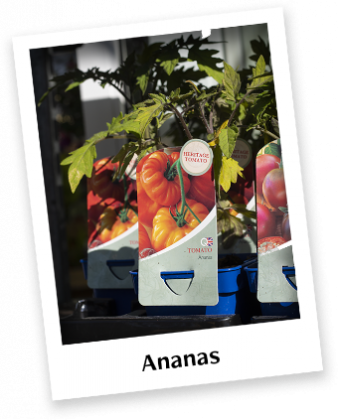 Black Russian – Cordon Variety
Medium sized black tomatoes grow on compact plants bearing plenty of fruit with a flavour that can be described as a blend of sugar and acid. Cornue de Andes – Cordon Variety
This is a firm favourite in French cooking, this is their variety of choice when making pizza topping!
Originating from the Peruvian Andes Mountains, this heritage variety produces fruit that can grow up to 1cm long, resembling red peppers more than tomatoes.
The flavour is delicious and benefits from less seeds and juice, hence why it’s such a popular cooking variety. Yellow Pear – Cordon Variety
As the name suggests this variety resembles a pear-like shape whilst being cherry tomato sized, making for a fun addition to any salad!
The outer sink has a golden-yellow tint and it’s inner flesh stands out amongst other tomatoes for it’s deliciously sharp flavour. First in the Field – Bush Variety
This is the only bush variety on our list, and as the name suggests this variety is grown for its early fruiting. From April – July this produces a heavy crop of bright red juicy fruits with a strong wine-like flavour. This is an ideal tomato to grow if you’re looking to grow outdoors in a garden or in an allotment plot.

Has heritage varieties piqued your interest, then why not visit our plant departments to find out about more varieties for you to expand your gardening and even culinary skills.