Plant of the Month - August

Plant of the Month - August

Summer’s great; sunshine… holidays… eating al fresco. The only downside is there always seems to be at least one pesky fly that finds its way indoors.

This is where carnivorous plants really shine; they attract those unwanted insects, trapping and digesting them!
They’re a fascinating order of plants which all have their own unique way of catching their prey, keep reading to find out more about each variety! 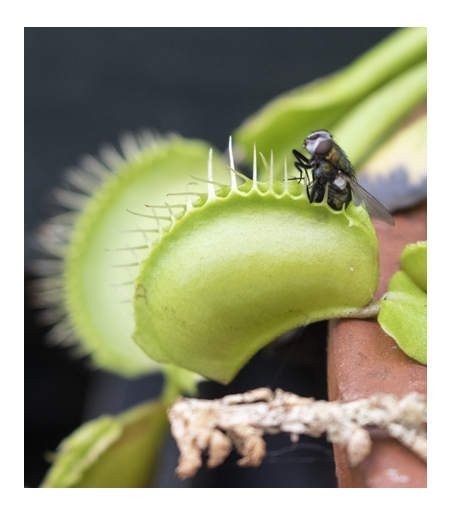 This eastern North American native is probably the most known of all the varieties covered in this blog, so chances are you know how the plant catches it’s prey.

But did you know that the Venus flytrap only slams shut after the second time in 20 seconds the delicate hairs on the inside of the trap are touched thus minimising the chances of the plant closing on debris.

As the ensnared insect continues to move inside the trap it stimulates the digestion process, which can last for 5 to 12 days.

Each traps is used two or three times for catching insects before it dies naturally and is replaced. Although it’s amazing to watch we advise you don’t stimulate the plant into closing as this will eventually kill it, if repeated too often.

Position:
Grow Venus flytraps in a frost-free greenhouse or on a windowsill in direct sun.

Watering:
Water enough to keep the plant moist but don’t allow it to stand in water for lengths of time. If possible use rainwater (remember waterbutts are great for house plants too!) as tapwater can be too alkaline for the plants.

Feeding:
The Venus flytrap does not need any additional feeding as they are designed to find their own source of nutrients (ie the trapped insects).

Winter:
The plant will go into it’s dormancy stage and will require less water, much like most houseplants during the colder period but it’s best to avoid temperatures lower than 10 °C. 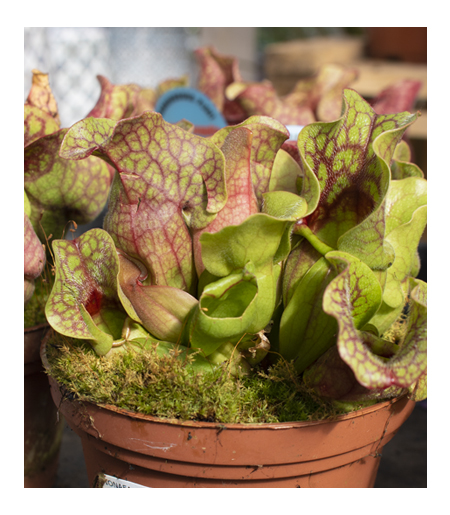 This carnivorous plant is native to the south eastern coastal plains of North America, growing in sunny, open wetlands.
The plant lures insects with its nectar who then fall into the long trumpet shaped traps and unable to climb up the slippery walls the insects are then digested.

Location:
Sarracenia love full direct sun which will bring out the vivid colours and create an overall stronger plant.

Watering:
Much like the Venus flytrap the trumpet pitcher plant like rainwater and plenty of it. Avoid watering from the top by sitting the plant pot in a saucer of water.
Maintain a high level of humidity in summer and reduce watering to moist rather than damp in winter.

Winter:
Again Sarracenia benefit from a dormant period over winter to promote strong and healthy growth the following year. The Trumpet pitcher plant will be fine exposed to temps of between 0°C and 15°C. You will notice the pitchers turning brown and dying back but don’t worry this is normal, just trim off any dead growth.

Did you know?
Some varieties such as S. leucophylla can grow to almost a meter tall! 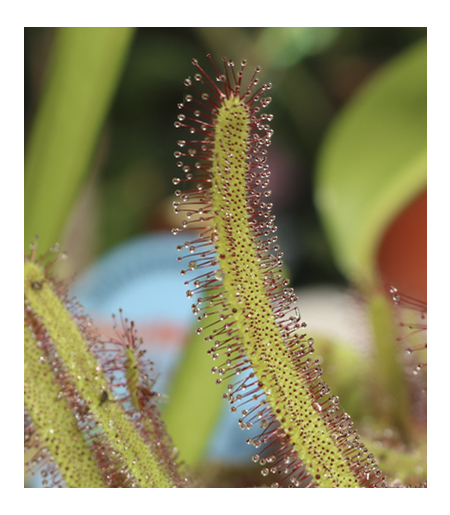 The Sundew is unique in its way of trapping and digesting its prey – it lures insects to the sticky drip at the end of the mass of tiny red tentacles also known as stalked mucilaginous glands. Once the insect is stuck the agile tentacles draw the insect to the leaf surface, where it’s then digested.

Most species of sundew can be found native to Australia and South America, but some varieties can be found in boggy areas of the UK too.

Location:
Choose an unheated greenhouse or windowsill with full or indirect sun. A sundew will dictate if it’s receiving enough sun by the strength of the red hue on its tentacles. Ideally they should be a bright red.

Watering:
As this is a humid loving bog and fenland plant. To replicate this environment make sure to water well with rain water in the summer and less so in winter. Try standing the pot in a tray of water about 1 – 2 inches deep of water during its growing season.

Winter:
Dormancy is different for each variety but the most common varieties found in garden centres will require a winter dormancy period, like the above. 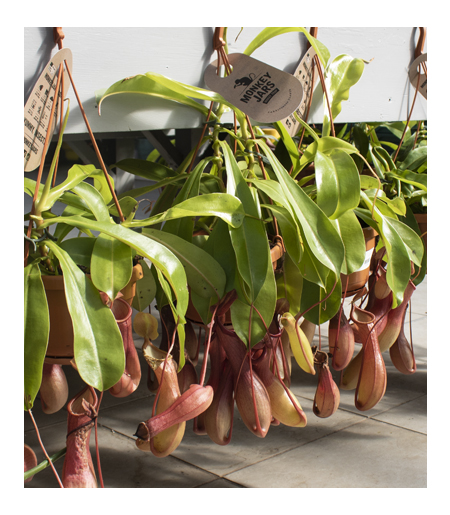 Nepenthes are native to Southeast Asia and the north eastern cape of Australia. They’re great for those who are looking for a hanging plant to add to their collection, or alternatively they can be grown successfully as climbers.

Known as Monkey jars, they capture insects (and on occasion for larger varieties small rodents and frogs) in the “jar” like pitchers that hang from the ends of their leaves.

Location:
For the best results grow Nepenthes on a sunny windowsill, protected from drafts and extreme heat or extreme cold. Don’t worry about humidity too much, the average household humidity should be fine.

Watering:
Unlike the previous plants mentioned, monkey jars can tolerate hard water, so there’s no need to head out to your waterbutt for this fuss-free plant.

When you do water, make sure to water well allowing the excess to drain through the soil completely and avoid standing the plant in water to minimise the chances of the roots rotting.

Winter:
Hyland varieties can tolerate a bit of a temperature drop, but generally avoid letting Nepenthes from dropping below 15°C. 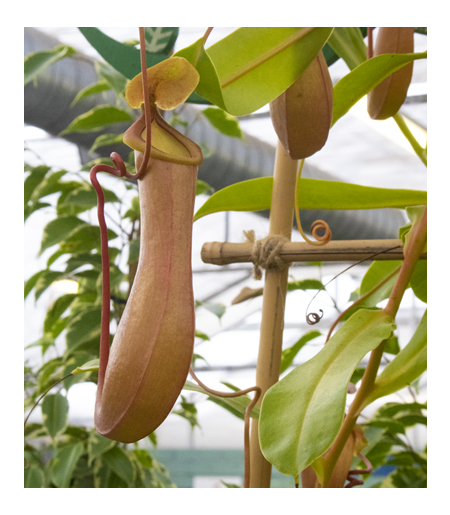 Feeding with a fertilizer is rarely necessary for any of the carnivorous plants as they’re used to living in nutrient poor soils, hence the need to catch and digest insects for extra energy! 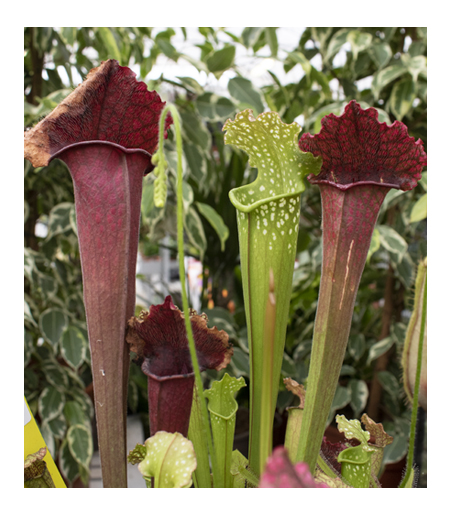 For further information about the different carnivorous plant varieties that Scotsdales has to offer contact us and we’ll be happy to assist you or come to your local Scotsdales store to speak with a member of our team.