Plant of the Month - October

Plant of the Month - October

Green, yellow, red, orange, brown, purple, black – flamboyant Croton brings autumn’s glow into your home.  The best-known is the multicoloured Croton (officially named Codiaeum variegatum), but there are also varieties with just yellow and green markings and with varying leaf sizes and shapes.

A benefit of growing crotons at home is that they are one of the few foliage plants that can tolerate direct sunlight. 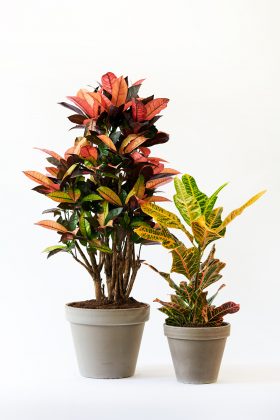 Origin
Croton grows in South-east Asia and the Indonesian archipelago. The plant is used as a hedge in many countries. In those regions Croton can grow very tall and spread outwards as a woody shrub. As a houseplant you usually encounter medium to XL specimens. The name is derived from the Greek word ‘kroton’, which means ‘tick’ and refers to the plant’s seeds, which look like ticks. Codiaeum is a member of the Euphorbiaceae family, which also includes other familiar houseplants such as Poinsettia and Crown of Thorns.

Croton range
There are many forms from large to small, including cultivars with various leaf shapes and leaf markings. They are all part of the species C. variegatum, which means variegated and refers to the multicoloured leaves. Some large-leaved cultivars are: Excellent, Petra, Norma, Mrs. Iceton, Nervia, Tamara and Wilma. Some small-leaved cultivars are: Gold Star, Gold Finger, Gold Sun, Mammi and Yellow Banana. 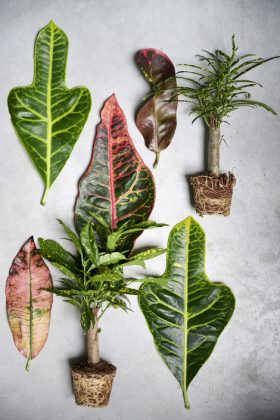