Plant of the Month – October

Plant of the Month – October

Plant of the Month – October – Orchid

Orchids are instantly recognisable with their elegant flower heads, often fleshy to the touch, but did you know they originate from the tropic regions of Asia and Australia such as the Himalayas and the Philippines?
They make ideal plants for gifting to those who are new to the world of house plants and can be a wonderfully extensive genus to collect. 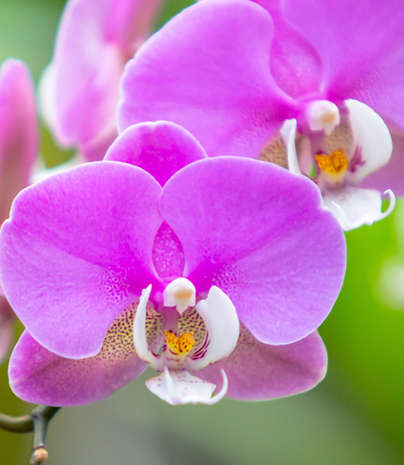 Orchids are a variety of plant known as epiphtypes which means they grow in the air rather than in soil, clinging to tree with their thick fleshy roots. This idea of having plenty of air circulation around the roots should be replicated when keeping an orchid as a house plant. This can be done through using orchid specific compost which should have plenty of bark chippings to aerate and careful watering to avoid roots from rotting. Orchids will tend to show when they needs watering by having their leaves pucker and the roots will turn to a silvery colour rather than the bright green when freshly watered. You can see when an orchid needs watering by planting in a clear orchid pot and always avoid leaving an orchid to stand in water.
Misting the leaves occasionally will help boost humidity levels, and your orchid can also be fed during the growing season. We recommend Growth Technology’s Orchid Focus and Orchid Myst to give the ideal mix of nutrients during the growing season.

Get the light right
Light is very important to orchids: too much turns the leaves yellow: too little changes the leaf colour to a very dark, dull green. An orchid is healthy when the leaves are a rich green, or grass green. Most orchids prefer bright, indirect natural light or 10-15 hours a day, and a temperature of 55 to 60F (13-15°) at night, 70F (21°) during the day.

Some of our favourites
Most house plant orchids fall into one of five popular groups. If you’re not sure which orchid will suit you best, here are the favourites.

Phalaenopsis (moth orchids)
Appearance: Large, waxy, oval shaped flowers and fleshy oval leaves.
Flowering period: Once a year, for between two to six months.
Flower colour: White, pink, purple, yellow.
Likes: This type of orchid will tolerate central heating, regular misting and dead-heading of the flowers.
Flowering tips: Before all the flowers have died and while the sap is still rising, cut the stem off above the highest “node” (there are lots of these along the length of the stem). This node should soon produce a side branch with more flower buds. 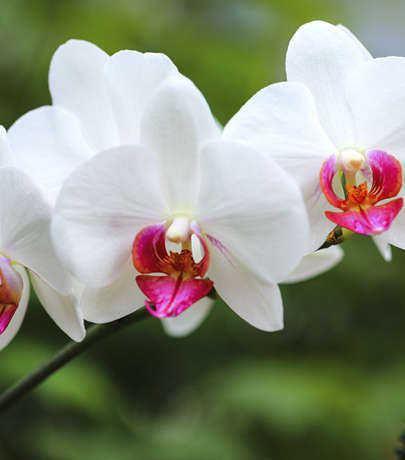 Dendrobium (Singapore orchid)
Appearance: Dainty, daffodil-shaped flowers on slender stems.
Flowering period: Once a year, for 6 to 10 weeks.
Flowering colour: Pure white, pink, purple, black, lemon and green.
Likes: Filtered (not direct) sunlight, clean rainwater or filtered tap water and moist air.
Flowering tips: Cut off old flowers near the base of the stem, but don’t cut down the cane (the main stem) as it stores the plant’s energy for the future. 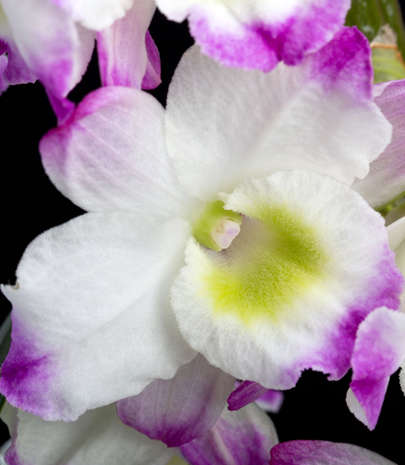 Vandas
Appearance: Elegant five petalled flowers, several to a stem.
Flowering period: One to three times a year for 6 – 8 weeks.
Likes, Bright light but not direct sunlight. Soak the rots or 10 mins every 7 days. Spray the leaves with a fine mist. 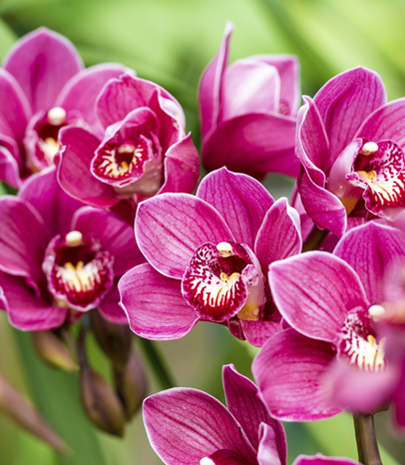 Odontoglossum & Oncidium (Tiger orchid & butterfly orchid)
Appearance: Ranges from large showy flowers on compact stems to tall branching spikes of many tiny bright blooms.
Flowering period: Every 9 to 10 months for 4 to 6 weeks (but can be as often as twice a year).
Flowering colour: Wide range of colours and patterns, including speckles, spots and “stripes”.
Likes: Plenty of light during winter, moist cool air, slightly dry compost between waterings.
Flowering tips: After the flower dies, trim the stems off right down to the base. 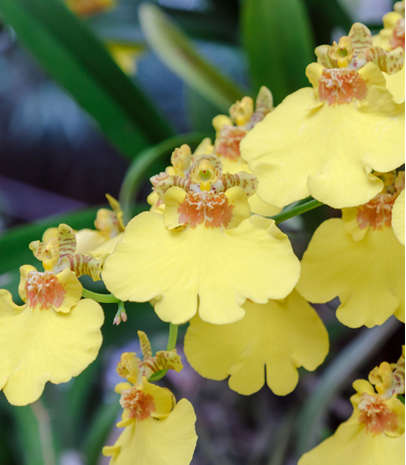